SARAJEVO - SKIS AND THE CITY 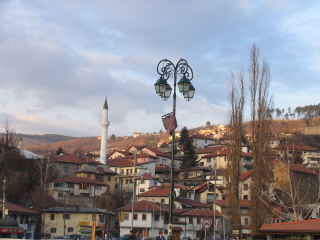 A view of Sarajevo

Not many cities on the old continent have such a diverse and tragic history as is the case with Sarajevo. Today the capital city of Bosnia & Herzegovina, one of seven countries that formed after the break-up of Yugoslavia, Sarajevo was many times on the crossroads of momentous events.


The Archduke Franz Ferdinand, the heir to the throne of the Austro-Hungarian Monarchy, and his wife Sophia were assassinated here in 1914 as a part of a Bosnian attempt to brush off Austrian rule, sparking off a much bigger conflict - the First World War. Sarajevo will always be remembered as the city with the longest siege in the history of modern wars. It survived 1400 days under the inescapable rain of grenades from the Serbian army located on the neighbouring mountains.

We fell in love with Sarajevo at first sight. For me this was a journey of an emotional reunion with a friend I had not seen for over a decade; for my other half, a lesson in the complicated past and present of the Balkans. The plane landed suddenly and smoothly when we were just starting to wonder if it would find a landing strip between all the sharp snowy peaks of the surrounding mountains. All of a sudden it becomes clear how such a long and horrifying siege was possible. The town is in the valley and the hills are like hanging balconies overlooking it from above. Nowhere to hide, nowhere to escape, unfortunately.


Sarajevo is a small and compact town and everything is a stone’s throw away. It took us only fifteen minutes or so to reach my friend’s apartment in a quarter of high-rise buildings decorated with dense ornaments left behind by the showers of grenades and brownish charred lines of fires which occasionally followed the explosions. Over the week we spent in the capital of Bosnia-Herzegovina we would see plenty of this. 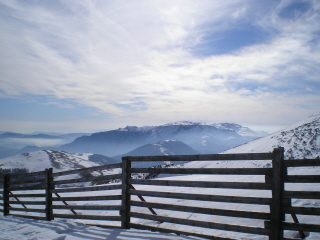 We are welcomed to town with a sunny and warm afternoon and we cannot help asking “are you sure there is any snow in the mountains?” Our friend assures us that we needn’t worry as there is plenty of snow for absolute ski novices. She had already arranged everything – the mountain (Bjelasnica), the ski instructor (a graduate journalist with fluent English and patience and understanding in abundance) and the times (three mornings) and we cannot pull out now. Oh no. Slopes of the Winter Olympic 1984, here we come!

Early next morning – before the sun reached the mountains and the snow started melting – we were picked up by our ski instructor and whisked away to Bjelasnica, where the Olympic men’s skiing took place. It is early in the morning on a working day in late February and there is hardly anyone around and we feel like we own the mountain. A perfect place to loose our ski virginity! Hopefully without breaking any bones.


During the three mornings of getting and losing balance and swearing loudly while trying to get up over a thousand and one times, the only other people we saw was a group of young policemen from the nearby academy. Dressed in all in black, they skied downhill one after the other forming a long and clumsy snake. I could not stop thinking of James Bond and the ski chase in For Your Eyes Only. The air was unbelievably fresh and pine trees calm and pensive. The only sound we could hear was the music coming from the refreshment centre at the bottom of the nursery slope. A selection of bygone eighties tunes such as We need a hero and Love shack. At the end of three intense mornings I could just about stay upright on my skis and turn left and right while aching all over. . . I will try again. Some day. When my bruises heal.

Skiing in Sarajevo is still a cheap affair and it is a great option for absolute beginners who are not sure whether they like it or not. Our 3-4 hour (depending on our stamina) sessions with the instructor over three days cost just over 100 pounds. Ski and boot rental and half a day ski-lift passes came to another 100 pounds. All together around 200 pounds (100 each). Not bad for three intense mornings on our own private mountain.

DESCENDING TO THE CITY 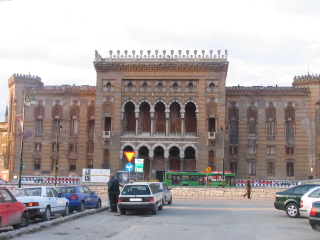 After three exhausting days at the slopes - mostly trying to keep upright while attempting fast turns in the manner of Olympic slalom skiers - we indulge ourselves in one of many excellent restaurants in the centre, in effect subscribing to one week of an Atkins diet. We
overdo it, but don’t feel guilty. After all we have to recover all the calories we burned on the slopes. The food is one hundred percent organic and all the meat comes from one of the local farms. A couple of times we returned to a charming meat-only eatery Petica – formerly owned by Asim Ferhatovic, one of the most famous footballers of Sarajevo ( Petica means Five, the number of his shirt) - for a healthy portion of cevapcici. Cevapcici are grilled mince meat fingers, popular all over the former Yugoslavia, and are always served in a warm somun (a kind of very tasty pita bread) with diced onions and a helping of full-fat creamy cheese spread, kajmak. 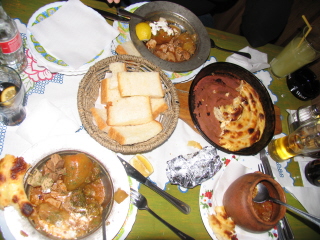 For a traditional Bosnian treat we headed to Inat Kuca and enjoyed an authentic three course meal served in old fashioned plates and containers. The Begova corba is a thick soup with chicken meat, okra and a dollop of sour cream, tasted just divine and the was just the starter. Sahan is a plate of a variety of vegetables stuffed with mince meat (a staple food in Bosnia) from peppers to onions and cabbage leaves in a delicious sauce. We finished our indulgence with a Bosnian coffee and a Rahatlokum , what we know as Turkish Delight. Not only we were fascinated by the meal, but the bill also left us speechless. It came to 30 pounds for our party of three. What a luscious treat!
We indulge in real Bosnian meza in one of our Bosnian host’s favourite restaurants Avlija. Great atmosphere – it really looks like someone’s back garden as the name suggests (Avlija is a word of Turkic origin meaning garden in Bosnian) – and a fantastic selection of local cheeses eaten with ustipci, which is a kind of savoury donut. We wash it down with a few bottles of red wine from the vineyards of Mostar in Herzegovina.

A WALK THROUGH HISTORY AND RELIGIONS 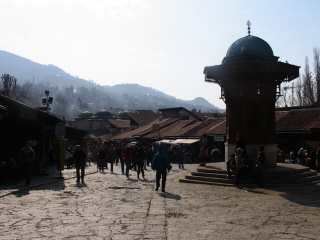 With its narrow cobbled streets and antique craftsmen, the Turkish quarter, Bascarsija, put a spell on us and we kept returning. The artisans were hammering and welding copper in front of your eyes and making fascinating coffee pots, dzezve, and cups, fildzan, with an immaculate precision which goes back to the time of the Ottoman Empire. When buying some perfectly engraved coffee pots and plates I discovered my talent at haggling – a very Turkish custom – and walked away with a few bargains.

Living up to my reputation as a shoe lover, I found my perfect souvenir in the Slipper and Mule shop Kalajdzisalihovic in Bascarsija. It is a family business going back to 1822 and the present owner, Ahmed, is producing colourful and sparkly outdoorsy slippers which could easily come out of the Thousand and One Nights. 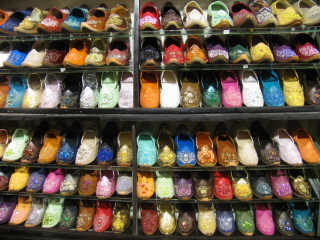 Sarajevo is a city with immense Turkish influence and we are reminded of it at every corner. The main public fountain, Sebilj, has been recently been refurbished in a pseudo Moorish style copied from Constantinople. The mystic sound of the imam calling for prayers from minarets cuts the air over the city. They are many mosques around Sarajevo, but the one worth visiting are the Begova dzamija in the centre of the Turkish quarter and Careva Mosque, on the other side of the river Miljacka.

Ferhandija is the main street for strolling at a leisurely pace and for shopping, but it also gives an insight into the diverse history of this city. It starts with the charming remains of the Ottoman rule, Bascarsija, develops into a Westernised beauty with buildings resembling Vienna and revealing Austrian influence and finishes on the square with the Eternal flame, a monument dedicated to the liberators of Sarajevo in the Second World War.

Along the Ferhandija there is the old Orthodox Church, while through a small passage we can reach the Velika Avlija, better known as the Jewish quarters; nearby there is the Catholic Cathedral. Sarajevo was always proud of its multi-ethnic and multi-religious community. And after the horrendous atrocities of the recent war, there is still (or again) hope that all these diverse religions can live together in peace, tolerance and understanding. Sarajevo is just like the phoenix slowly coming out of the ashes and rebuilding its old charm and uniqueness. 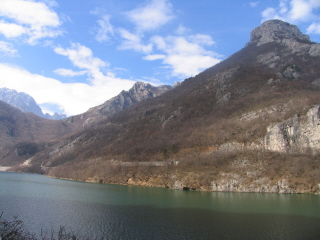 On the way to Mostar

Two hours drive away from Sarajevo is the charming town of Mostar, another town which suffered atrocities during the recent war in the Balkans. There are not many good roads in Bosnia and Herzegovina, and the road to Mostar took us through some truly amazing scenery of dramatic hills and breathtaking views of the canyon of the Neretva River. We also experienced a couple of scary encounters with some pretty mad local drivers.

Halfway through we stopped at the bridge over the river Neretva, one of the crucial points in the battle between the Yugoslav Partisans and the Germans. It was also depicted in the 1969 Oscar movie “Battle of Neretva”, which is seen as one of the most successful movies of the Former Yugoslavia starring internationally famous names such as Orson Welles and Yul Brynner.

After kilometres of steep ascends and descends with spectacular panoramas, the outskirts of Mostar offered our eyes a smoother landscape, a very Mediterranean countryside rich in wine grapes and sun.

Mostar is still a sharply divided town. On one side there is the old Muslim part with cobbled streets and souvenir shops with rugs, paintings and copper jewellery around the river leading to the old bridge; a bridge which is a remarkable monument in the history of this town. It was built in the style of Ottoman rulers according to some books as early as 1458, but it was demolished by the Croat army during the bloody conflict in the nineties and later rebuilt. The name itself of Mostar means “the bridge keepers” in Bosnian. 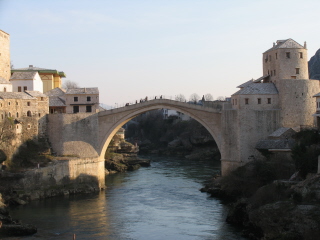 The Old Bridge in Mostar
Further afield there is the Catholic, Croatian part, which unmistakably resembles the centre of Zagreb, the Croatian capital. The demolished bridge has been rebuilt; it is a pity the division between these two parts of what used to be one town is still unbearably sharp and irreconcilable.