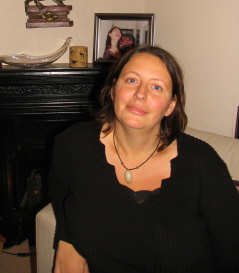 Photographer Kerstin Hacker recently returned from a fascinating trip to Zambia with the Sightsavers International Charity. This charity has been fighting sight-related illnesses and blindness in the developing countries for over fifty years and Kerstin tell us about her impressions from a life-changing trip, but also touches upon her own journey from a small Bavarian town to Walthamstow

Pulsating black and white images of rural life in Pakistan, Mongolia and Tibet welcome us into the house of Walthamstow photographer Kerstin Hacker. These photographs are vivid accounts of some of the places where her immense curiosity has taken her. “A bit poorly” like her young child, she invites me around for a cup of coffee and a chat about her latest project.


Kerstin recently returned from a captivating working expedition to Zambia with the Sightsavers International charity bringing back a powerful photographic testimony of the struggle and the willpower of local people.


“The Zambian Copperbelt region is a highly industrial part of the country known for its mines and high levels of pollution. Gigantic copper mines are releasing poisonous gases and chemicals and all vegetation is dying, my throat was hurting and I was coughing only after 15 minutes there, and I don’t want to think what happens to the lungs of people who live there,” says Kerstin. Sightsavers International has been fighting sight-related illnesses and blindness in developing countries for over 50 years and Kerstin’s role on their recent ten-day trip to Zambia was to keep a photographic diary which will be used for brochures and other promotional materials to show Sightsavers’ efforts in the developing world.


“We witnessed incredible efforts by the volunteers of the Zambian Sightsavers’ partner Ronald Ross to promote eye care and hygiene among the local people. They were also doing their best to introduce a cataract operation, which people from the region we went to were very scared of. These local volunteers don’t have much in life for themselves, but are still giving a lot and I was very impressed with their devotion and determination to improve eyesight issues in the region. During our ten-day trip, we produced a few fascinating case studies,” says Kerstin while opening her folder of captivating Zambian images, each of which tells a story of its own.


One of them is the story of a 13-year-old boy who had cataracts in both eyes and couldn’t see at all. He lived with his sister and was a very quiet, shy and withdrawn boy.


Kerstin explains: “After the operation we witnessed a complete personality change in him. Once he could see, he became a typical cheeky and mischievous 13-year-old lad and was asking for apples and sweets. The cataract operation was a miracle for him and the first thing he did when he got home after the operation was to watch the telly.”


Next is the story of a blind old woman whose grandchildren used to steal food from her plate at mealtimes. Kerstin gives an emotional portrayal of the old Zambian woman who can finally see and was looking forward to eating whole portions again.


Kerstin Hacker was born in the small Bavarian town of Zwiesel and finished her studies and the MA at the FAMU in Prague in Czech Republic. “This academy is one of the oldest art schools in Europe, which kept its tradition even during the communist regime. It was a great place to study.” As a winner of the “Alexia Foundation for World Peace” scholarship, Kerstin spent six months in London at Syracuse University in 1996. She adds: “Alexia Tsairis was a photography journalist and a victim of the terrorist bombing of the flight over Lockerbie, and her parents established this grant to honour her memory.” One year later, in 1997, Kerstin took on an internship at Magnum moving to London for good and four years ago Walthamstow became her home. Kerstin teaches photography at Thames Valley University, City Lit and Bishopsgate Institute of Photography. She has exhibited works from her rich portfolio in Czech Republic, Uzbekistan, Germany, USA and UK and her photographs have been published in a variety of British broadsheets, school prospectus and fundraising materials.
Next
Previous